How to select a Planet for PI

For questions on nomming rocks and planetary interaction.
Forum rules
This forum can be viewed by the public.
Post Reply
8 posts • Page 1 of 1

How to select a Planet for PI

I've recently become interested in doing PI as it seems to be an interesting side source of ISK. I've done part of my training (Interplanetary II, Remote Sensing III, Command Center III (worki=ng on IV), and Planetology IV). I've also done my research and watched a couple of youtube videos (Jurius Doctor and REISense). However I'm having trouble figuring out which planet is a "good" planet. The hprizontal chart below the name of the planet will give an overview on how rich the planet is on a the specific material, but whenever I try to play around with the slider that shows the concentration pockets in the planet I have to move it like waaaay down in order to see some white spots (see pic). Does this mean that there are no actual high concentration pockets and that the planet is not that good as the inidcators would lead you to beleieve, or should I just move the thing down untill I see white spots and have faith that whatever I want to extract is there? 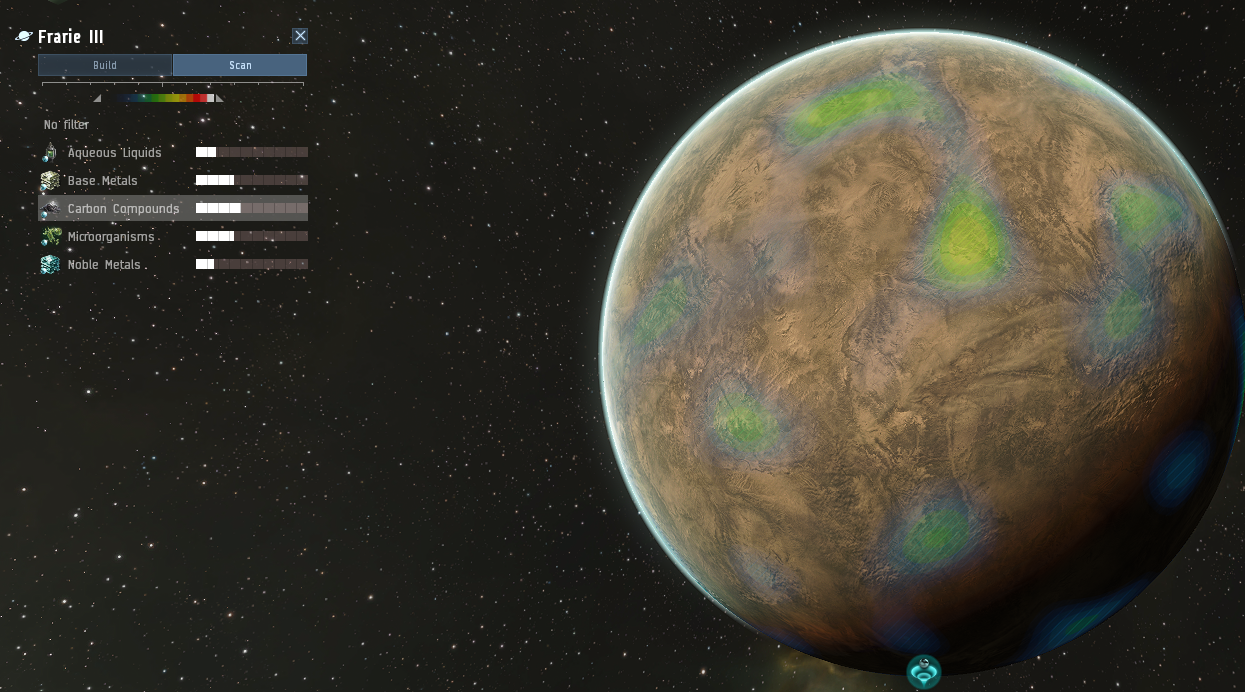 The color codes are a somewhat absolute measurement - not relative to the planet itself.

That planet’s horizontal bars are fairly short - it isn’t surprising to see those colors being the highest concentrations ok that planet.

Null sec will be even better than low. Yes, you’ll need to move the range of the slider down a bit to see color in low sec. lower security, higher risk, better rewards.
Anidien Dallacort - Teaching Officer, Mentor, Sophomore

Thanks for your reply.


Anidien Dallacort wrote:The color codes are a somewhat absolute measurement - not relative to the planet itself.
That planet’s horizontal bars are fairly short - it isn’t surprising to see those colors being the highest concentrations ok that planet.

What would you say is the "minimum" bar count for a planet to be worth it?
Top


Anidien Dallacort wrote:The color codes are a somewhat absolute measurement - not relative to the planet itself.
That planet’s horizontal bars are fairly short - it isn’t surprising to see those colors being the highest concentrations ok that planet.

What would you say is the "minimum" bar count for a planet to be worth it?

Whatever provides you enough extraction to meet your objectives haha. I don’t think there is one good answer to that.

If you have to go 20 jumps, twice a week, to find a planet that meets your minimums, are you willing to do that, for example? Or does a lesser planet closer to home meet your goals?
Anidien Dallacort - Teaching Officer, Mentor, Sophomore

so basically there is no lower margin for discarding the idea of producing a certain type of thing with the planets one has available? Like can you still get a decent production out of planets with one or two bars of stuff?
Top

Varvax wrote:so basically there is no lower margin for discarding the idea of producing a certain type of thing with the planets one has available? Like can you still get a decent production out of planets with one or two bars of stuff?

There is a lower margin if you have a specific goal - if your goal is “I want to keep factories running consistently in a R0 to P4 chain with only self harvested R0” - there’s a minimum amount of R0 per hour you need, and a 2 bar planet probably isn’t going to help cut it, without a lot of extra characters harvesting the same planets.

If the goal is “make as much isk as I can with minimal effort” - like a lot of people use PI to do - effort includes how far you have to go to do the PI - and if that’s the best planet local to where you “live” - well there you go.

Once you drop a command center, you can start placing extractors and get a much better idea of actual numerical yields (and simultaneously a better idea of what x bars kinda means in terms of your goals). Command centers are cheap, and you can always disband the colony.

Alternatively - play around on SiSi for a bit to get a field for yields and how they do/don’t fit your plans. That way you aren’t spending real isk to trial PI.
Anidien Dallacort - Teaching Officer, Mentor, Sophomore

The planet in your screenshot does not appear to have a great concentration of resources.

A large amount of time is invested upfront in selecting your planets for PI. It is therefore important to choose wisely.

You want to make a list of planets with potential that are close to each other, such as in a spreadsheet. This is hard to do by simply looking at the length of the horizontal bar next to the resource.

Instead, go to the "Resource Harvesting" tab under the Agency window. There, filter by type pf planet, location and security status. Selecting a system in the middle pane, and then a planet on the right pane. Once a planet is selected in the right pane of the "Resource Harvesting", hover your mouse over the resource in which you are interested, which will reveal a percentage concentration for the resource. This is the measurement you want to record, and use to compare between different planets.
Top

I recently reconfigured my PI planets, so I thought I would share my experiences.

The first time I did PI I did it up near HSC. At the time I did not realize just how bad the hisec planets are compared to nullsec planets. The amount of raw resource you can pull out of the ground is just so much better. Seriously, if you want to do PI "for money" you should move to NSC

The second time I did PI I did it in the NSC pocket. I made a couple of mistakes this time. Firstly, I didn't consider the tax situation. Taxes on the Customs Stations was high (for nullsec) and I managed to put my planets in 5 different systems, managing to avoid the one system with 0% tax. Doh.

So I recently redid things for the third time (I have a lot of extra isk from moon mining, go moon goo).
This time around, I found the Customs Stations with the lowest taxes. NSC was recently "gifted" several Customs Stations, so that helped.

I knew I wanted to make P2. NSC buyback does not take P1, so I can't sell that and previous researched indicated that P2 was the best to sell on the market.
So I copied the list of P2s into eveprasial.com to see what they were selling for. NSC buyback uses eveprasial.com so I thought it best to base my decisions on what I would actually get for the P2s.

http://www.evepraisal.com/a/y8hxj there's the evepraisal link.
Looking at the "single buy" value, and that'll be what sells the best. Prices vary day to day, so that's the "today price" obviously. The prices are actually quite a bit different from just this morning, sheesh.

It auto-sorts by the "single sell" value, but buyback uses the buy value so ignore the sell value. So pay attention to the buy value.

So you can look at those values, and then look here for how to make things:
https://wiki.eveuniversity.org/Planetary_Commodities

So once you know what sells well, and on what planets you can make those you need to look for the right system. You need customs stations with low taxes, and if you're in hisec you need the Customs Code skill to reduce taxes.

Then make sure that the Extractors are producing 12000+ for at least a couple of hours. I also set the time to 3 days.
On nullsec planets that's 2-4 extractor heads.

Some days I Stop/Start the extractors twice a day, sometimes once a day. Whenever I want to. Sometimes I forget. I don't stress about it.
Top
Post Reply
8 posts • Page 1 of 1