For general discussion about EVE Online.
Forum rules
Discussions about EVE University should go in the E-Uni General Discussion subforum. If you have questions about joining EVE University, please contact our Personnel Department.
Post Reply
4 posts • Page 1 of 1

After our dear leader Jilo made a statement about the CSM elections and EVE University's neutrality, I though it's a good idea to have a space for people to share their thoughts, ballots, discuss candidates etc.

Besides the official CSM Forums where each candidate has a thread explaining why they want to be elected, the community has been creating a lot of content like interviews, blog posts etc. about the CSM16 elections.

Some of the most impressive and informative are summarised below: Please feel free to share your thoughts, ballots etc.
EVE University NSC Manager; Personnel Officer; Communications Officer

Here is my personal ballot.

There are so many independent and interesting candidates this year, that it was quite hard to decide. Especially in which order I'd rank them.

You can find me on Twitter @hideo_date
I stream over at: https://www.twitch.tv/hideodate
Check out my blog at hideodate.WordPress.com

Every year 6-7 spots go to big Null-Sec alliances, even though they don't represent such an overwhelming number of people.
Every year we have an amazing roster of "independent" candidates running, without being on the ballot of the big Null-Sec groups. Players with an incredible amount of experience and knowledge. Some of them are focusing particularly on the New Player Experience and longevity of the game. Something that is not only in the interest of EVE Uni but the whole community.

Accordingly, I have chosen my ballot to hopefully give those players a chance. 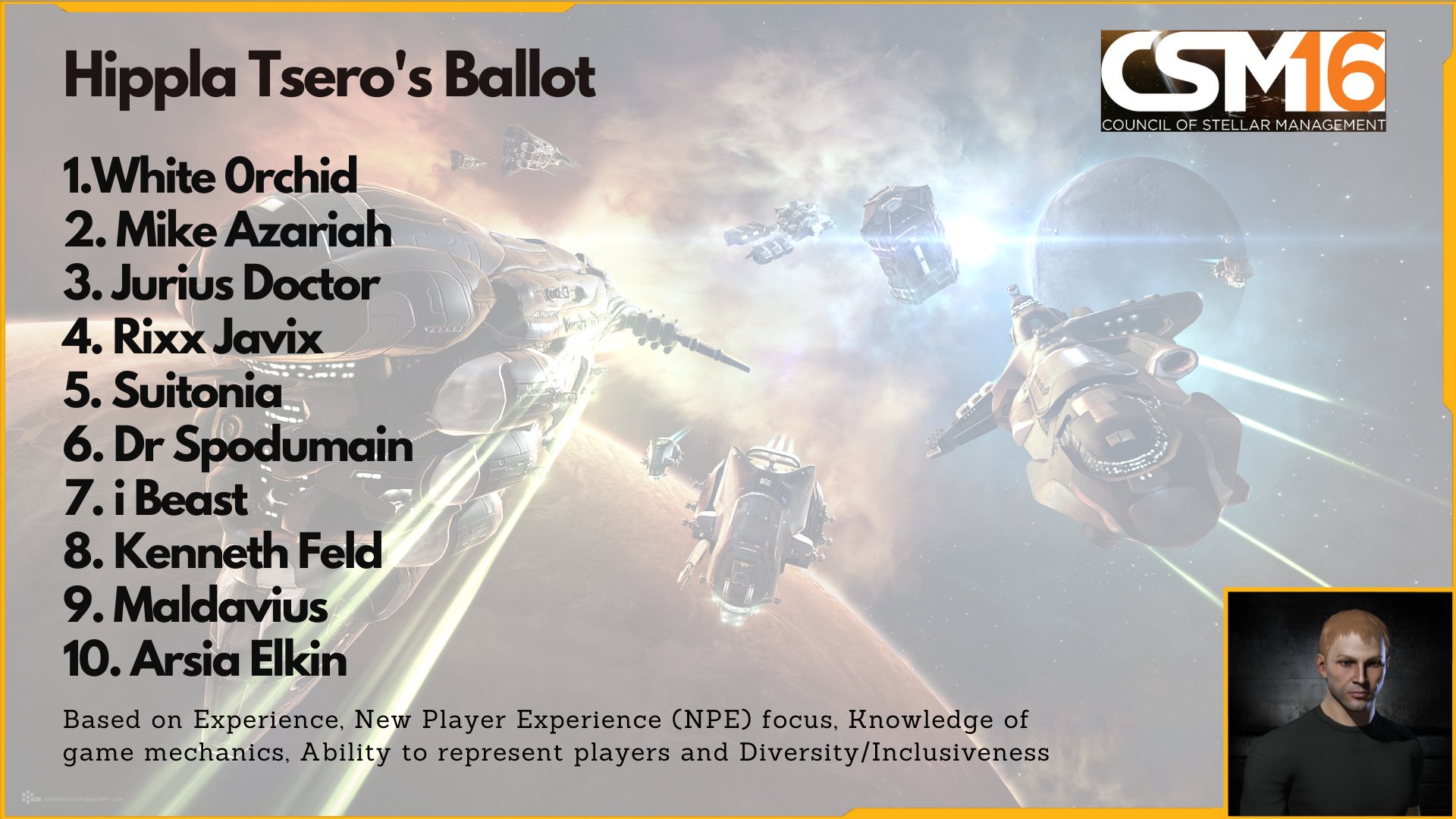 White 0rchid aka Lonez as my #1 represents both, the type of CSM member that has sufficient knowledge of all areas of the game and the type that understands what makes EVE attractive enough for new players to want to stick around and feel like they are playing a game that's not at the brink of dying. He has proven during our recent RvB war just how much of an added value he brings to the Community and the Uni. Easy choice!

With Mike and Jurius, we have two players running on the "New player experience" ballot. While Mike focuses with his Operation Magic Schoolbus that he has been running for years on brand new characters. Jurius' focus is on teaching in-depth mechanics for players in their first months through his YouTube and ingame and has a great overall understanding of the game. Both have proven their commitment to supporting and teaching new players (Jurius even as part of the Uni back in the days). Easy #2 and #'3

Whatever comes after those three is unfortunately pretty much irrelevant. The Single Transferable Vote system with the number of CSM spots (10) and the number of candidates (46 this year) means that the selection happens between top-of-the-ballot candidates.

I still chose a range of people that I think would be good for the overall health and longevity of the game. I would be happy to see any of them in the CSM and hope you will consider voting for them as well, maybe even on the top of your ballot.

When I started EVE and the CSM15 last year was happening, I wished for a bit more guidance on what would be good for someone "like me", new to the game, completely lost in its complexity, yet intrigued by the amazing community (both as a whole and EVE Uni in particular). So if you don't have the time to look through ... hours and hours and hours and hours ... of interviews, I hope that giving you my Top3 allows you to at least look at those guys and decide whether they deserve your vote as well

Voting has now closed on this. Live announcement next week (21st) to showcase the winners.

I didn't post my votes here beforehand as didn't want to come across biased due to my involvement. But my main ones went to: